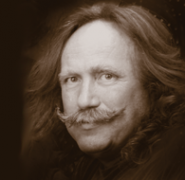 1There are many other painters in the world, but the collectors of Csaba Markus will tell you that there is only one whose paintings can create such contrasts within such harmony and one who can express the Eternal Feminine in her many guises, both as mortal woman and as mythological goddess. There is one who does not paint merely to please the eye but to shake the soul of the viewer. There is only one and his name is Csaba Markus.

The gradual shaping of Markus’ artistic style and philosophy found its origins in Budapest, Hungary, where the artist was born in 1953. He spent the first half of his life enmeshed in the traditions and Old World ideologies of Europe and in his search for direction he discovered and thoroughly embraced the artists of the Renaissance. His mentors became the works of artists such as Michelangelo, Caravaggio, and Botticelli, and his goal echoed their own: to find the perfect way of expressing himself through his art.

Markus’ quest for artistic expression brought both frustration and inner tension as he yearned to discover the world and to open himself up to every possible experience. He began to travel and his wanderings and exposure to different cultures were a source of endless inspiration. He began to experiment with hundreds of different techniques and media such as glass, sculpture, ceramics, handmade papers, etchings, mono prints, and even animation, as his paintings reflected the universal influences of his travels. Even as he continuously challenged himself with new ideas and techniques, Markus was always drawn back to the ideals of the Renaissance period. This resulted in the creation of his own highly unique style, a contemporary fusion of Renaissance Europe and Classical Mythology.

His artistic development, however, was hindered by the rigorous controls of the Communist system in his native country. His desire for individuality and recognition clashed with the tenets of the Communism and he eventually realized that he could not flourish in such a restrictive environment. With the Old World ideals and Renaissance philosophies of his youth firmly in mind, Markus left Europe to travel the world and eventually established a fine art studio in California.

The studio was a realization of one of his lifelong dreams which was to design a fully creative environment that would allow him to challenge himself daily, plus someplace that would inspire exciting new ideas and innovations. With the creation of his studio he was also able to turn his incredible focus and determination to fulfilling yet another dream: to make the finest art prints, such as etchings, stone lithographs and serigraphs. It was not only a dream but also a reaction to the demand for his art from his world base of collectors. He could not fulfill the need to share his art strictly through originals as there could never be enough to satisfy the demand. He also would not compromise the quality of his editions. “I want to create editions that are unique and of the highest quality,” the artist has explained. “They should look as though I’d just finished painting it and put my paintbrush down five minutes before.”

Markus has described serigraphy as the “beautiful struggle,” illustrating the continuously evolving and intensely difficult process in which he works with many layers of colors, textures, and intricate details of the serigraph until he has finally fashioned the masterpiece of his vision. Each piece is extensively hand-embellished by Markus himself with dried pigments, ground glass, platinum, and 24 carat gold, in the tradition of European artisanship that Markus brings to all of his limited edition serigraphs. It is his desire for each and every piece to be a unique and individual objet d’art and his most recent creations have proved no exception. Like a symphony for the eyes, every design, detail, and hue has been finely tuned for the blending of an artistic masterpiece.

Markus is the innovator of Caldographs, an art form that combines his mastery of ancient techniques with modern technology. Watch this video to learn more about this amazing art on wood.

Markus’ distinctive style is like no other and for this reason he stands alone, incomparable to other artists. From him, one can expect the unexpected as he continues to surprise his collectors with new art forms and innovative ideas, exceeding his own incredibly high expectations. His painting, which has been shaped by the varied influences and experiences of his journey through life, has an undeniably universal appeal. He is one of the most widely collected contemporary artists across the world and his collectors wait eagerly to see what he will do next. His work is currently displayed in prestigious art galleries throughout the United States, England, France, Russia, and Japan, and his commissioned pieces hang in some of the most exclusive private collections in the United States.