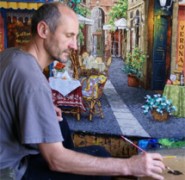 Viktor Shvaiko was born in Altai, Russia in 1965, the son of an economist and an engineer.  He grew up in one of Russia’s most remote villages surrounded by the beauty of the wilderness.

At the age of 12, he didn’t hesitate to choose studying at junior art school. His natural inclination for the fine arts and his strong urge to share his vision of nature drove him to the Novoaltaisk Artistic School, where he studied for four years. Shvaiko credits his teacher, Ilbek Khairoullinov, for a true arts education.

After graduating, Shvaiko was drafted into the army for two years as an artist, handling lettering and illustrations for posters and signs. He even copied famous paintings to be given as presents to generals. In 1987 after demobilizing, Shvaiko took an adventure by traveling to Irkutsk (Siberia) with few possessions and money, and found his faith during the arduous journey. This journey led him to Barnaul, where he took a job as a graphic designer for a construction company. In 1988 his father arranged for him to work in Kiev, where Shvaiko eventually met Valentina. They married in 1989, and in the fall of that year their first child, Elvira, was born.

When Shvaiko showed a landscape painting he created to Valentina, she was so excited that she encouraged him to follow his passion full-time. Shvaiko took it to heart, leaving his job to join the Artist’s Union. This led to him exhibiting in galleries, where his paintings were successfully sold. This further spurred the artist to hold a one-person exhibition, and he used the earnings to fuel a trip to Yugoslavia and continued into Italy. He loaded up 15 canvases and his equipment and left the USSR, staying in Rieka, close to the border of Italy.

He survived by selling his paintings on the streets, and eventually made the trek to Italy on foot with his 85-pound rucksack. Dodging past guards and customs, he finally made it to the country that he views as a symbol of art. He arrived in Rome with $5 in his pocket, meeting up with some friends and using what money he could gather to restart his art career.

For months he would again sell his artwork on the streets, finding inspiration and beauty from the doors and windows of Rome’s architecture. Three months later, as an artist in residence at the Rastropovich Institute, he was sent to Russia on a business trip as the institute’s representative, finally allowing him to reunite with his wife and daughter. He discovered the liberated Russia he returned to offered the chance to travel to the United States, and after a brief return to Rome, he arrived in New York in 1992.

In 1993, Shvaiko survived by selling his work at galleries with the aid of an English-speaking friend. Demand for his paintings grew, and after a year of this success, he was able to bring his wife and daughter to live in America with him. They had a second child, Andrew, in 1997, and in 2014, Shvaiko became an American citizen.

In the U.S., Shvaiko developed his penchant for painting little cafes and other intimate places that are seen in his contemporary work. He paints from dark to light, using a variety of brushes and palette knives as well as glazes and varnishes. He often has the complete image in his mind before he begins.

His settings are inspired by real places he has visited, often using photographs or sketches he took on site as a basis. However, he exercises his artistic license to create ideal scenes that express his impressions or feelings of a locale.

Shvaiko’s work shows a personal take on settings in Europe. Upon closer inspection, what appear to be simple compositions soon take on depth and complexity thanks to his subtle palette. Intimate settings, whether they are winding passageways or a view from a café window, draw in the viewer to immerse themselves.

Shvaiko invokes the fourth dimension of time. Hints here and there, such as the angle of shadows or radiant sunlight, clue the viewer in to the time of day. Peeling walls or faded paint speak to the locale’s history. Hints of life also appear – flowers, signs, decorations, poured glasses of wine – all of which combine to give a sense of story.

Shvaiko’s works have been exhibited in New York, Japan, Italy, Canada, Ukraine and many cities throughout the United States.