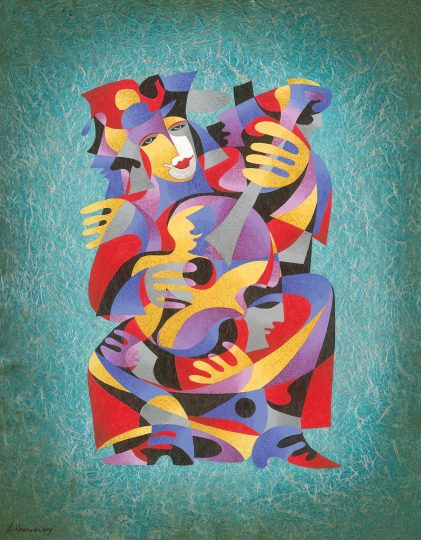 Artist Anatole Krasnyansky didn’t interpret the hard rock band KISS as music, but a “message from Hell” that resulted in the birth of a second style.

Following his immigration to the United States from the U.S.S.R. in 1975, Krasnyansky worked as a set designer and background artist for TV and movie studios. In 1981, while working on a special for ABC-TV, Krasnyansky encountered KISS.

KISS is notorious for its iconic face paint, elaborate costumes, and intense rock performances involving pyrotechnics, smoke, and flashing lights. Nothing in Krasnyansky’s classical Eastern European training could prepare him for KISS’ assault on his senses.

“For me it was a culture shock,” Krasnyansky says.

Krasnyansky needed to purge the distress and anger he felt, but found his traditional artistic style based in architecture couldn’t properly convey his feelings. The artist continued searching until he adopted a surreal and Baroque style. 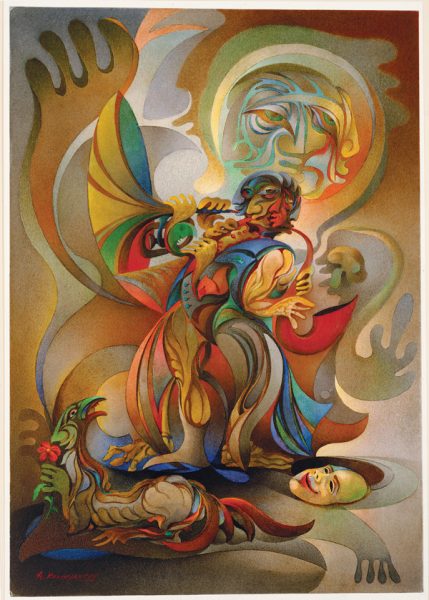 The first painting resulting from this exorcism of emotion was “Rok’n’Roll,” created in the early 1980s. In it, a multi-faced grotesque figure plays horn-like instruments amidst a nightmarish setting. A mask floats ominously in the background above the figure, which Krasnyansky says represents KISS’ god.

“I did the symbol of the god of this scariness,” Krasnyansky says. “It’s empty, there is nothing behind [it]. There is no body, there is no soul.”

With the completion of “Rok’n’Roll,” Krasnyansky made a realization that changed the way he viewed humanity—everyone, including KISS, wear masks. Krasnyansky says depending where we are and who we are with we adapt and put on a mask. 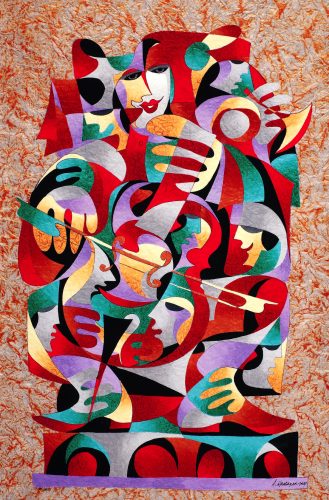 With this realization, Krasnyansky explored his new style further, combining the structural aspects of his architectural background with vibrant, visual energy and bright colors. His figures evolved from monstrous beings to playful jesters donning masks with whimsical expressions. For Krasnyansky, what started as a message from Hell became divine inspiration.

“I discovered for myself a new method, a new approach,” Krasnyansky says. “If it becomes important for the art world, then I will thank God for my destiny.” 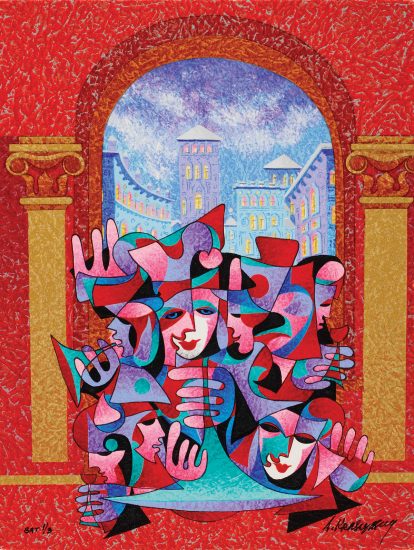 Krasnyansky’s surreal figures retain their musical origins, often depicted with string instruments, horns or accordions. Combined with Krasnyansky’s introduction of texture with handmade paper, the figures practically vibrate off the canvas with life and music.

Never one to forget his roots, Krasnyansky continues to paint in his two distinct styles, even combining them to create colorful figures dancing and performing in grand, arched buildings.

For information on how to collect the artwork of Krasnyansky, contact Park West Gallery at (800) 521-9654 ext. 4 or sales@parkwestgallery.com.