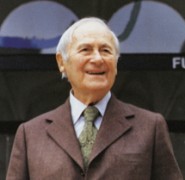 Joan Miró was born in Barcelona, Spain, as the son of a goldsmith and jewelry maker. He studied art at the Academia Galí and at the Barcelona School of Fine Arts, where he was admitted at 14. His parents dissuaded him to pursue his desire to become an artist and he initially worked as an accountant.

Eventually convincing his parents of his determination, Miró made his first trip to Paris in 1920 and settled there in 1921. He met Picasso and other important emerging artists in Paris, the cultural center for art in the early part of the 20th century. In 1924, Miró aligned himself with the Surrealist movement through founder and proponent, Andre Breton. He associated with the artists Max Ernst, Andre Masson, and others, but always remained on the periphery of Surrealism.

By 1930, Miró had developed his own unique style of imagery derived from elements of Catalan folk art and the art of children. Eventually, Breton described him as, “the most Surrealist of us all.” His fame and recognition became international during the 1930s. From 1940 to 1948, Miró returned to his homeland where he began to experiment with many media, including lithography, etching, ceramics, sculpture and the creation of murals. In 1947, he visited the United States for the first time and was the subject of many important museum exhibitions, including two at the Museum of Modern Art in New York (in 1951 and 1959). In 1956, Miró settled in Majorca, Spain, in a studio that was eventually transformed into the Miró Museum.

Miró’s personality was surprising, as well. He was a remarkably modest man and wore dark business suits. He was orderly, detail oriented, meticulous, and reliable. Defying the stereotype of the modern artist, there was nothing of the “bohemian” present in him at all. He became one of the most prolific creators of original lithographs and etchings, using highly-textured applications of color – a technique that would later be called carborundum aquatint. Today, Miró is viewed by the art world and collectors as one of the most important artists of the 20th century and the precursor for much of modern art.