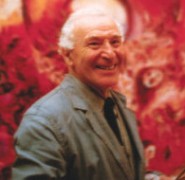 Marc Chagall’s masterful, evocative works are characterized by their poetic, mystical qualities, their expressionist perspective, and their use of bold, vivid color. Chagall’s style has been associated with the art movements of surrealism, fauvism, and cubism but instead of fitting neatly into one category, Chagall created a style uniquely his own.

Chagall was born as Moyshe Segal in Vitebsk, Russia, on July 7, 1887, the eldest of nine boys. The members of the Chagall family were devout Hassidic Jews; Chagall’s faith would greatly inspire his art in the future and themes of Jewish symbolism were frequently featured in his works. The experience of growing up in a close-knit family, impoverished but happy, would also influence his artwork.

Chagall’s parents did not support their son’s early desire to become an artist. He began studying at the local Yehuda Pen School of Painting in 1907 but after a bitter argument with his father only a few months later, he fled to St. Petersburg to pursue his passion. He continued his studies there at the Imperial Society for the Protection of the Arts and the Zvantseva School of Drawing and Painting.

During this time, Jews were only allowed to live in St. Petersburg if that residence was necessitated by their professions – and then only with a permit. Chagall was jailed briefly for a time for residing in the city without the proper paperwork. He left for Paris in 1910, attracted by the Parisian art scene – in particular the Montparnasse district. In Paris, he encountered works by surrealist, fauvist, and cubist artists. His now characteristic style began to develop and his works began to receive recognition from the art community. He participated in the Salon des Indépendants and the Salon d’Automne in 1912. A one-man show in Berlin in 1914 helped to solidify his position as an important up-and-coming artist.

Chagall returned to his hometown in 1914. “The soil that nourished the roots of my art was Vitebsk,” he said in his 1994 autobiography, “My Life.” It was here that he met Bella Rosenfeld, whom he married in 1915. Love is a recurring theme in Chagall’s art and is often personified in his work by the image of Bella. “In our life there is a single color, as on an artist’s palette, which provides the meaning of life and art. It is the color of love,” Chagall said. “Only love interests me and I am only in contact with things that revolve around love.”

The start of World War I in 1914 prevented Chagall from returning to Paris and he and Bella remained in Vitebsk where he served as Commissar for Art, founding the Vitebsk Popular Art School in 1918. After resigning from the school following tensions with the supremacist painters, he, Bella, and their daughter, Ida, left for Moscow and then Berlin before settling in Paris in 1923. There Chagall met and began working with famed art dealer and publisher Ambroise Vollard who commissioned him to illustrate Nicolai Gogol’s “Les Ames Mortes” (“Dead Souls”) and Jean de La Fontaine’s “Fables.” Chagall also began a series of etchings based on the stories of the Bible at the request of Vollard, which he completed in 1956.

The Nazi occupation of France forced the Chagalls to flee Paris, first for the south of France, and then, in 1941, to the United States where he would remain until 1947. His wife, companion and inspiration, Bella, died in 1944. Chagall sunk into a depression and was unable to work for months.

Chagall returned to France in 1948 and would remain there for the rest of his life. The cloud over his life lifted through a relationship with Virginia Haggard, with whom he had a son, and his creativity returned. He began to explore new media, working in stained glass, sculpture, mosaics and ceramics.

In 1952 Chagall married Valentina Brodsky – “Vava,” as he affectionately called her – who would be his companion throughout the rest of his life. That same year he was commissioned by Teriade, the heir to Vollard, to create a series of gouaches illustrating Longus’ love story Daphnis and Chloe which was translated into an important series of lithographs in 1961. Chagall created twelve stained glass windows for the Hadassah Hebrew University Medical Center in Jerusalem in 1961, St. Etienne’s Cathedral in Metz, France in 1962, the glass at Notre-Dame de Reims in Reims, France in 1974, and the glass at Saint Etienne Church at Mayence in 1981. He also decorated the ceiling of the Paris Opera in 1964 and murals for the Metropolitan Opera House in New York City in 1966. In 1964, Chagall created his famed lithographic series, “Le Cirque” (“The Circus”).

After a long and prolific career in the arts, Chagall died in Saint-Paul-de-Vence, France on March 28, 1985, at age 97. His work continues to be studied and admired in numerous public and private collections throughout the world and his name lives on as a modern master in art history.