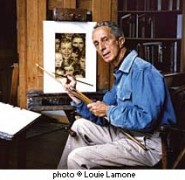 Whether you’ve seen his covers for the Saturday Evening Post, his World War II paintings commissioned by President Roosevelt, or been to his museum in Stockbridge, Massachusetts, one thing is certain: Norman Rockwell has become an iconic American painter.

Born on February 3, 1894, Rockwell attended multiple art schools, finally settling into the New York Art Students League, founded by one of his major influences, Howard Pyle. He began his full-time career as an illustrator at the age of 18 and never imagined the pinnacle his art would reach, both as an illustrator and as an artist. At 19, he was the art director for Boy’s Life (the magazine for Boy Scouts of America) and had already illustrated his first book. At 22, he produced his first cover of the Saturday Evening Post which continued for the next 47 years, totaling 322 original covers. With a captive audience of more than 4 million readers, the exposure Rockwell received was unprecedented, allowing for his illustrations to reach the hearts of the American people. Throughout decades illustrating for the Post, Rockwell covered a range of topics that playfully captured everything from heartwarming moments of the American family to inspirational scenes in American history. In 1943, President Roosevelt commissioned Rockwell to paint Four Freedoms: “Freedom of Speech,” “Freedom of Worship,” “Freedom from Want,” and “Freedom from Fear,” helping to raise more than $130 million in war bonds.

Twenty years later, in 1963, Rockwell left the Post. Illustrating at Look Magazine for the next 10 years, he finally got to paint the controversial subjects like civil rights and poverty that were prohibited by the Post, bringing about some of his most famous work. His painting, “The Problem We All Live With,” shows a young African American girl (Ruby Bridges) being escorted to school on the first day of New Orleans’ integration. This drew an incredibly controversial reaction from the American public, Rockwell finally able to confront his captive audience.

The 1970s proved career-altering for Rockwell. Thomas Buechner wrote the first major fine art book about him in 1970, titled “Norman Rockwell: Artist and Illustrator.” Published by Harry N. Abrams, Inc., exhibitions were held shortly after its release and their attendance was startlingly record-breaking.

Afterwards, Rockwell began making lithographs with Circle Gallery, and by the third year, editions were selling out as quickly as they were published. Later he created works for other publishers and developed a large international market for his prints, paintings, drawings, and collectibles. Today the phrase “like a Norman Rockwell painting” summarizes the far-reaching influence he achieved portraying American culture and the playful satire of his hundreds of Saturday Evening Post covers.